Bill and I set off on a driving trip to Colorado. The timing was interesting as there was a winter storm heading into Arizona that was looking to be quite a storm. We decided to set off in the wee hours of the morning to try to stay in front of it and get an early start on the drive. So at 2am On Wednesday we went North through Usery Pass to the Beeline highway and all the way up to Payson. As we hit Payson, the very first snow flurries we starting to come down. Keeping an eye on the weather forecast as we went along, but our plan seemed to pan out well as we stayed in front of the storm the entire day. We cut further north at Heber then started heading east towards New Mexico. We arrived at Gallup around 6 in the morning. We had a quick breakfast, and then we were off again. Snow was definitely on the ground here and it was 14 degrees outside! This will pretty much set the temperature for the rest of the trip. 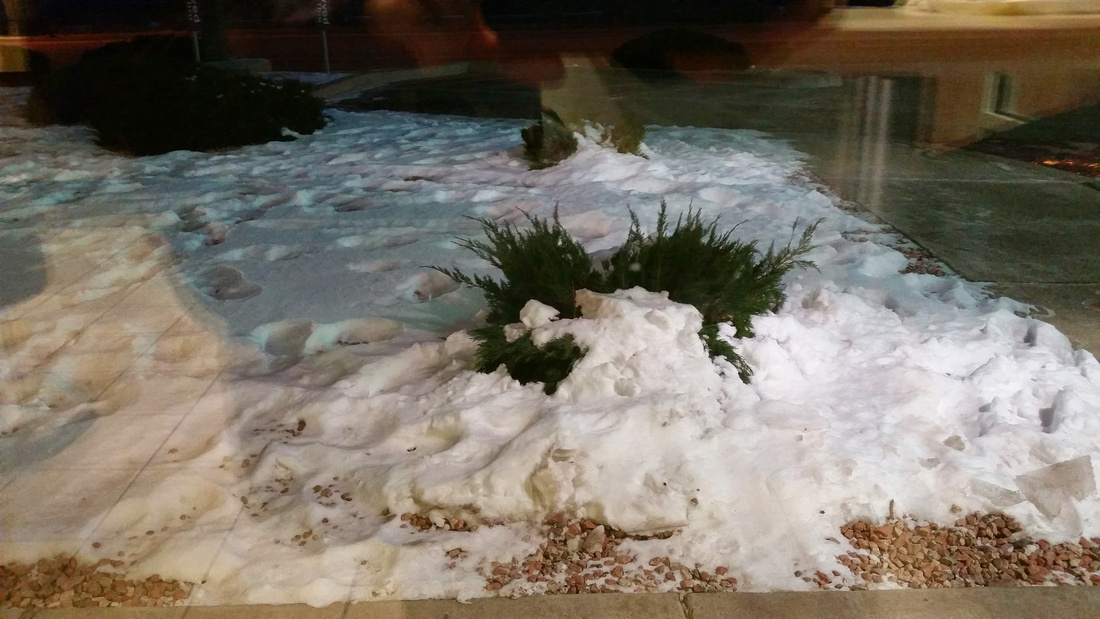 We went through Albuquerque and then headed North past Sante Fe. The land around here was very beautiful, but I think I must have been a bit tired around then because for some crazy reason I took almost no photographs the first couple days of our trip. I am going to include a couple I took with my phone, cause at least its something! It was definitely cold outside! Around noon we stopped at a little rest stop North of Las Vegas, NM. I did get a couple photos here.. everything was covered in snow! Very pretty, but definitely made me break out the winter boots (Thanks Beth!) and warm hat, gloves, and scarf. These were pretty much a staple for most of my time from here on out! 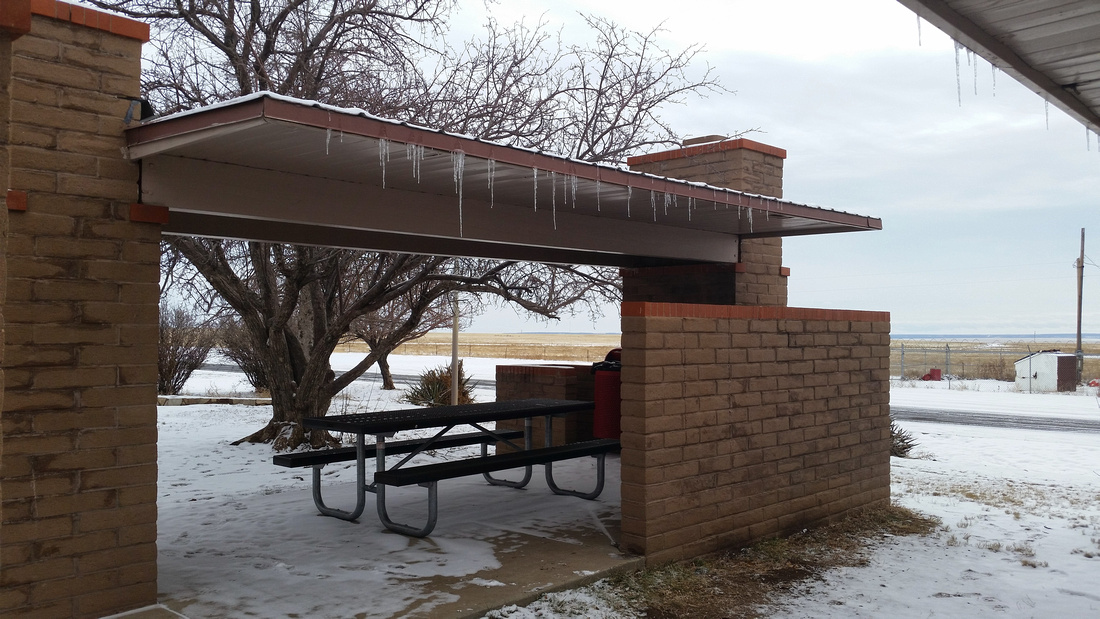 We kept heading North and made it into Colorado a couple hours later, and the difference was striking. Colorado really is a beautiful state, even when covered in snow! We kept going on our way and around 4pm we made it into Colorado Springs. I forgot to write down the temperature at that time.. But pretty much the rest of our time in Colorado it was in the teens to mid-twenties. I purchased some long-johns to put on under my jeans, and Bill bought a couple long sleeve shirts. These would be our friends for the rest of our time in Colorado. Oh! Side note.. this was right around the time we discovered my washer fluid had frozen solid. We purchased the -20 stuff that would melt ice.. but it was not until most of the way through the next day that the original fluid thawed and merged with the new stuff and we could clean my windshield. Definitely something to remember for next time!! 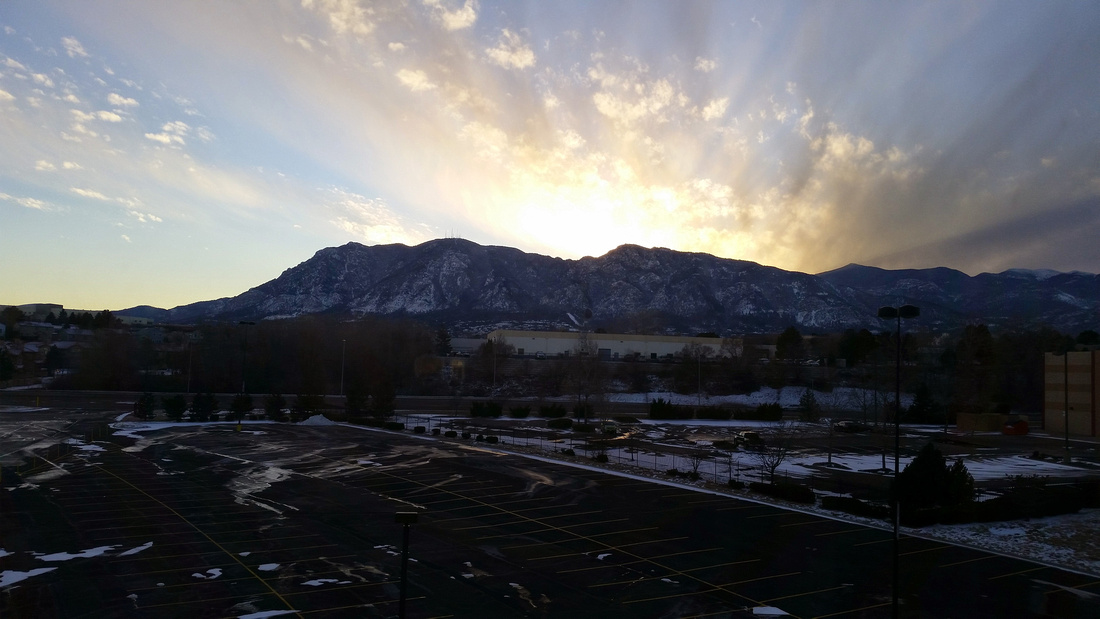 View from the end of the hall in our hotel

Waking up in Colorado Springs was interesting because it was snowing when we went outside! A small storm had settled in, however we could see that it would clear up if we headed North towards Ft. Collins, which was our plan anyway. We decided we could explore Colorado Springs when we headed back, since it was snowing here and clear further North. As mentioned earlier, we had no working windshield wiper fluid.. and the wipes I keep in the car for this purpose had frozen solid in the car overnight!! A couple hours later we were in Ft. Collins. It is a beautiful city and was a lot of fun to explore for that day. We even went out of town a bit, and a short 30 minute drive brought us to a small KOA that Bill had stayed when he was here earlier that year. It was closed due to the snow now, but it was cool to know that you could go so close to town and still be completely in the wilderness for camping. 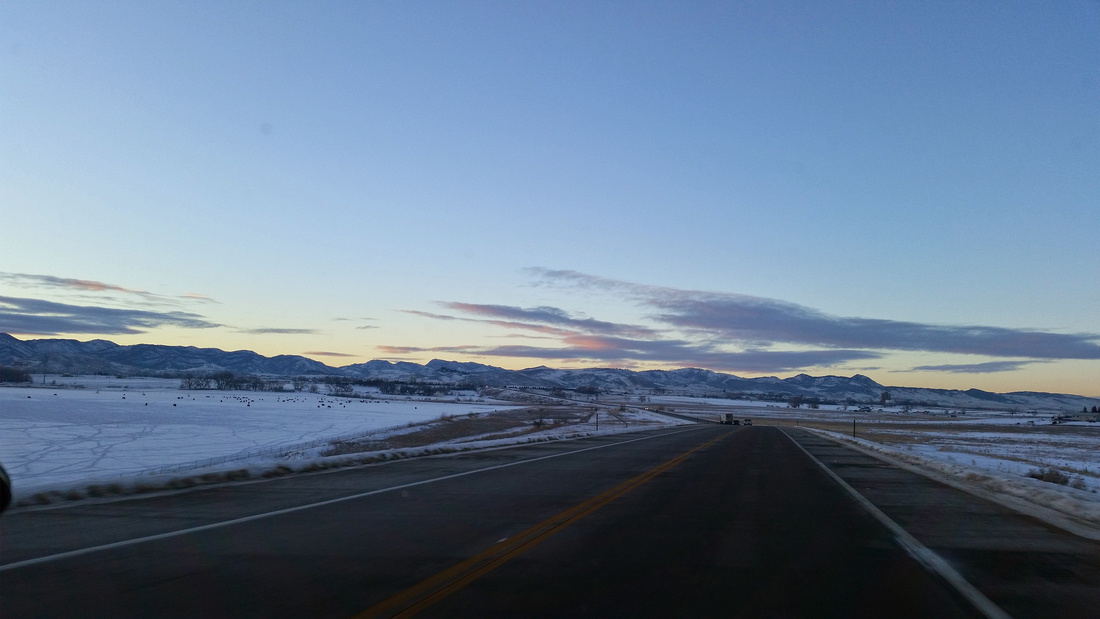 We started our day by heading out of Ft. Collins towards Boulder. The drive was not on the highway this time, but a smaller road that still moved along well closer to the mountains. It was very beautiful, and we passed a nice park just as we were leaving Ft. Collins. It was another spot Bill had stopped when he was here earlier, so I wanted to see it too.

This was our view: 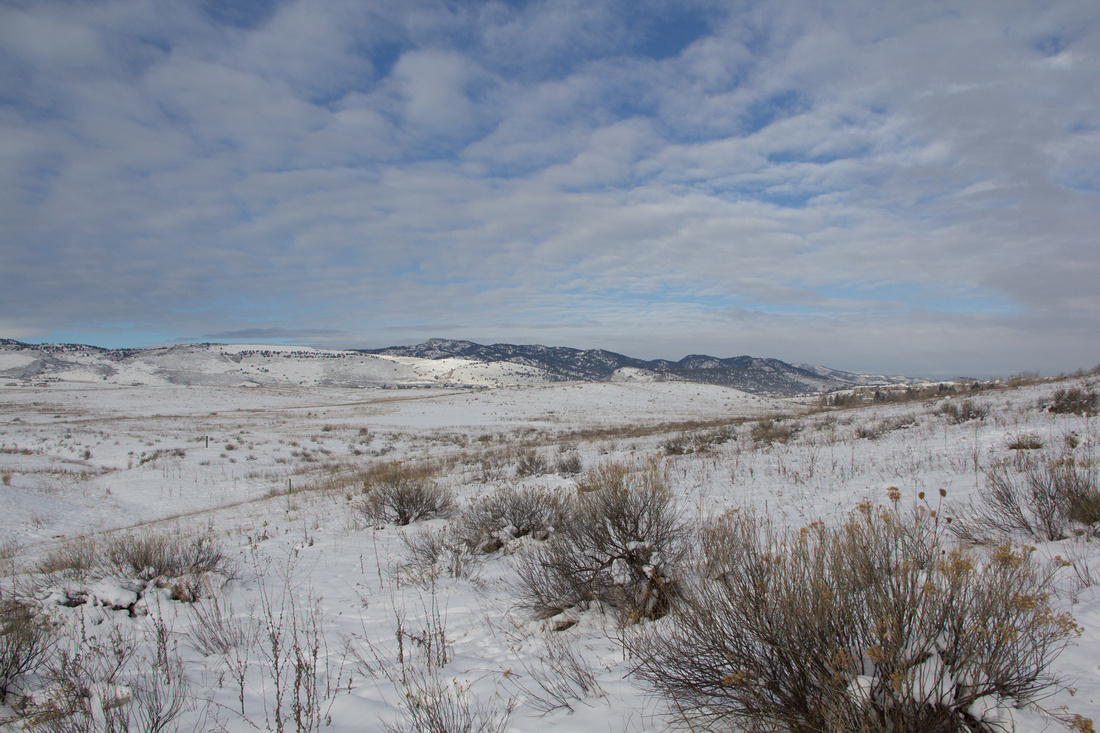 Day 3 - View from pathView we had on our trip - still beautiful!

To compare, this was from Bills Trip: 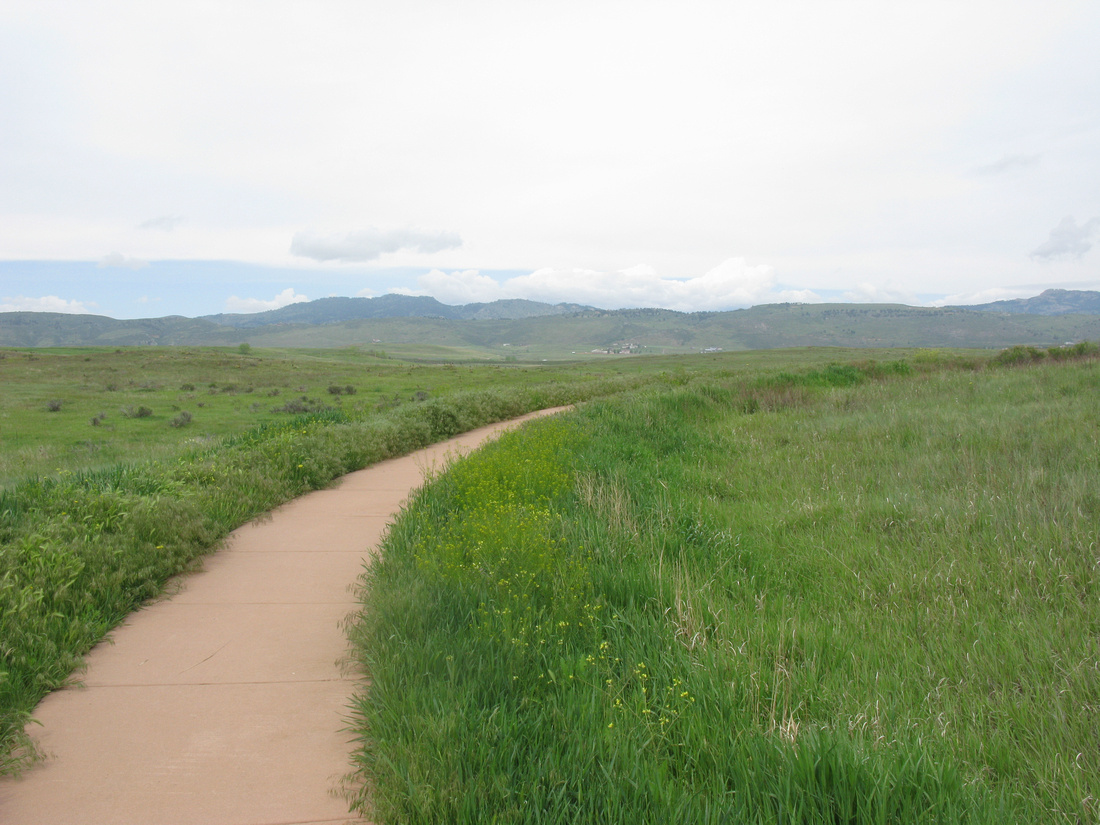 We continued out of town and then made it up to Boulder. This was a nice town as well, but had a much smaller feel and the winding roads in the snow were not to my taste. We decided to keep going and headed to Golden as we were told the road from Boulder to Golden was very pretty. It definitely was! 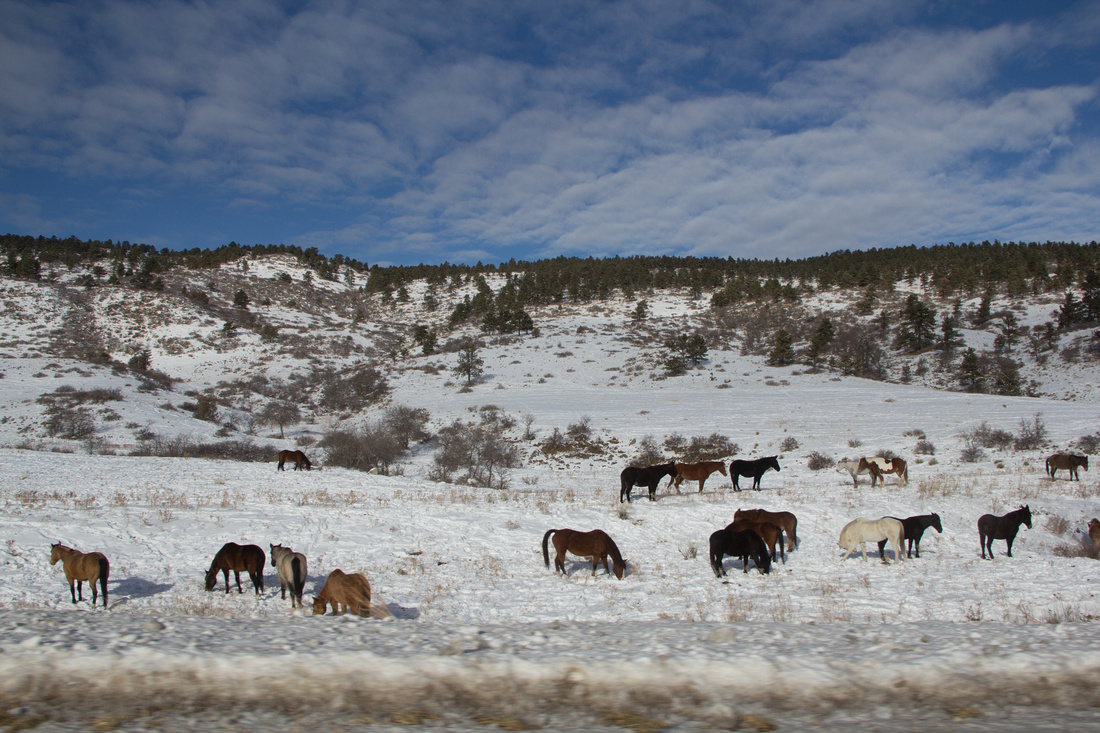 Once we hit Golden we started tossing around the idea of heading back via a different path. If we took the path West it would take us through the Rockies and into Utah. I was all for it, but Bill wanted to make sure the path was clear of storms and would not add too much time to our drive. It was slated to only add around an hour and no storms were forecasted. We were on our way! And this is what we saw as we entered the Rockies. I did not get tired of this view the entire time.. it was simply gorgeous. Unfortunately it was also a bit treacherous thanks to the snow the last couple days and the fact that parts of the road are in the shadow of the mountains for most of the day. So we had to cut our speed quite a bit and added at least an additional hour, possibly two. I still consider it worth it! 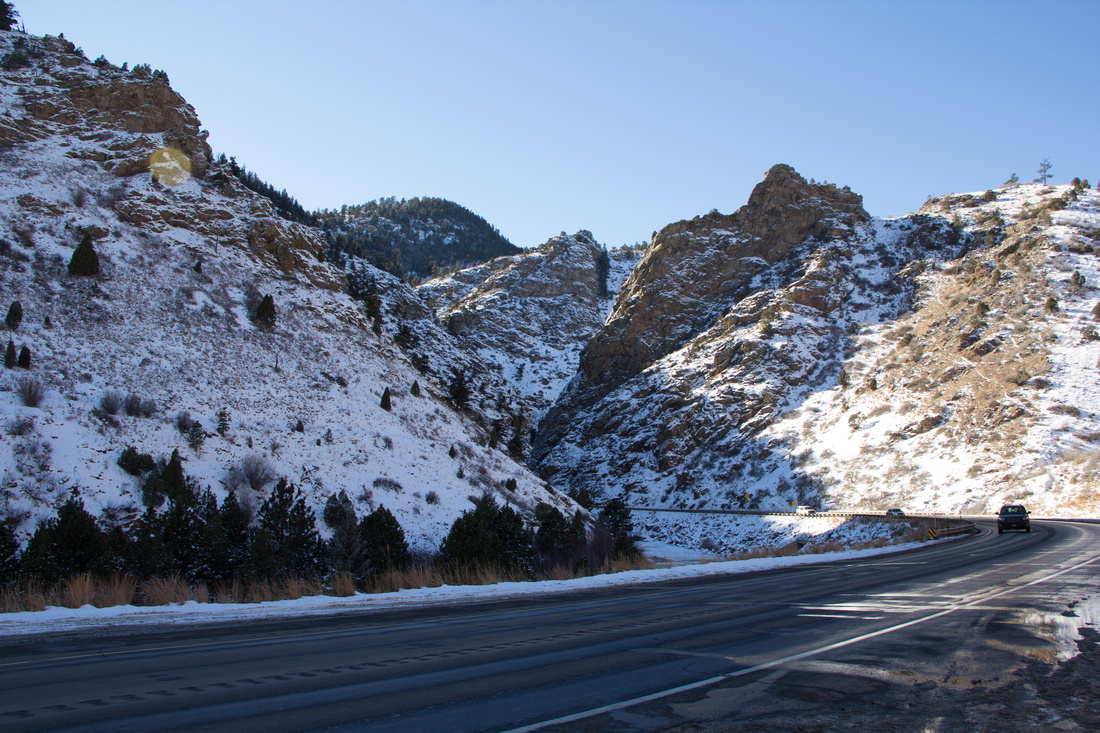 We arrived in Moab Utah around 7:30 that evening and decided the next town was too small to risk whether or not they would have a hotel. Note: The next town was Monticello.. and I am glad we didn't try to push through as there was not much there and hardly any hotels. So we stayed the night knowing tomorrow we would be back in Arizona.

We woke up and headed out of town, and had this view to greet us as we were leaving Moab. 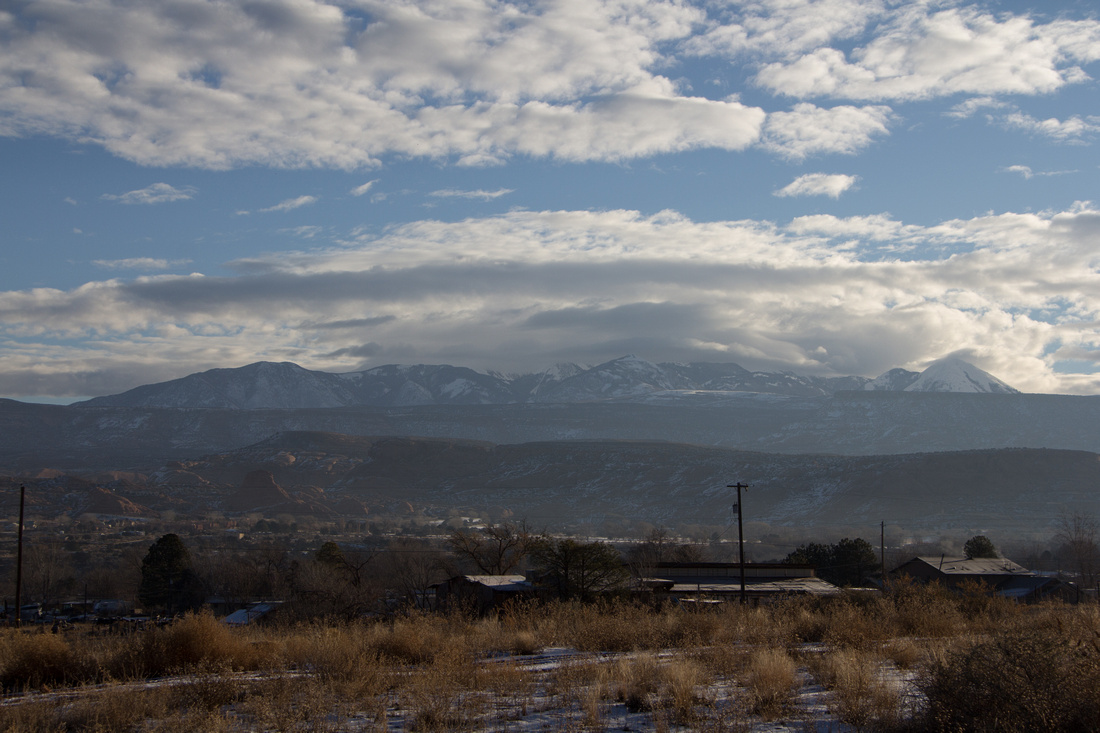 Seriously love the mountains! And I totally forgot that Moab has its own unique taste to add to the trip. As we are driving along and the lovely red cliffs are on either side we pass this. 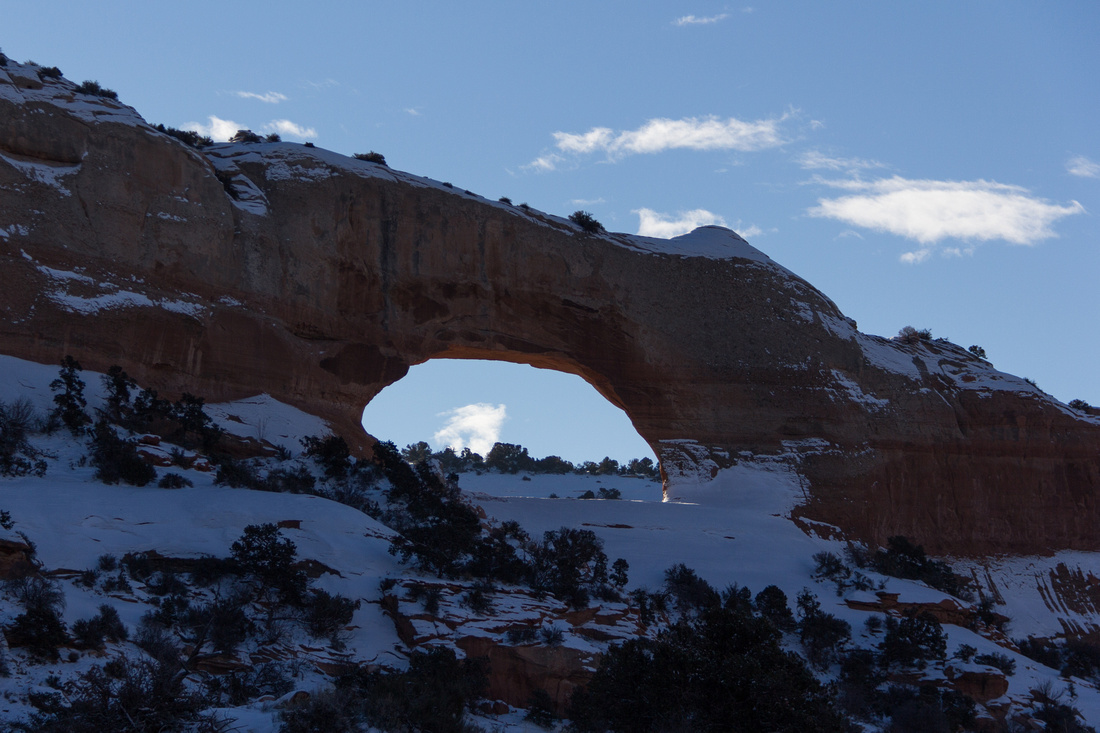 Totally want to come back some day for some night photography!! I think it would be a lot of fun here. We were making good time on the way home when suddenly ahead and just below us we see some odd clouds.. or is that fog? 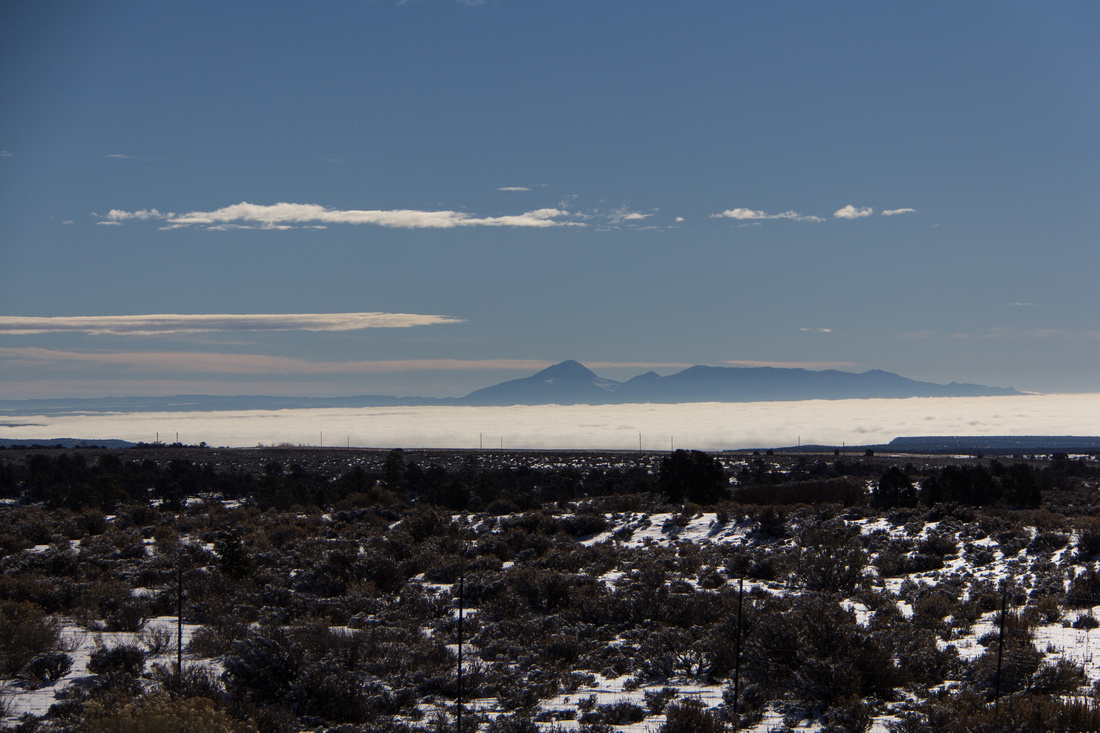 Day 4 - Seeing Fog from a distance

As we get closer we realize we are about to drive down into it.. Visibility definitely was effected by it, but it coated everything around it with ice crystals. Very surreal and beautiful.

After this we continued on and soon passed into Northern Arizona. This part was fairly uneventful until the GPS glitched and sent us along a unplowed 2 lane road on the reservation. We went along for around 4 miles and decided it was not going to end soon and turned around.. it was a crazy little road, and definitely the most nerve-wracking ice/snow driving for me the entire trip! 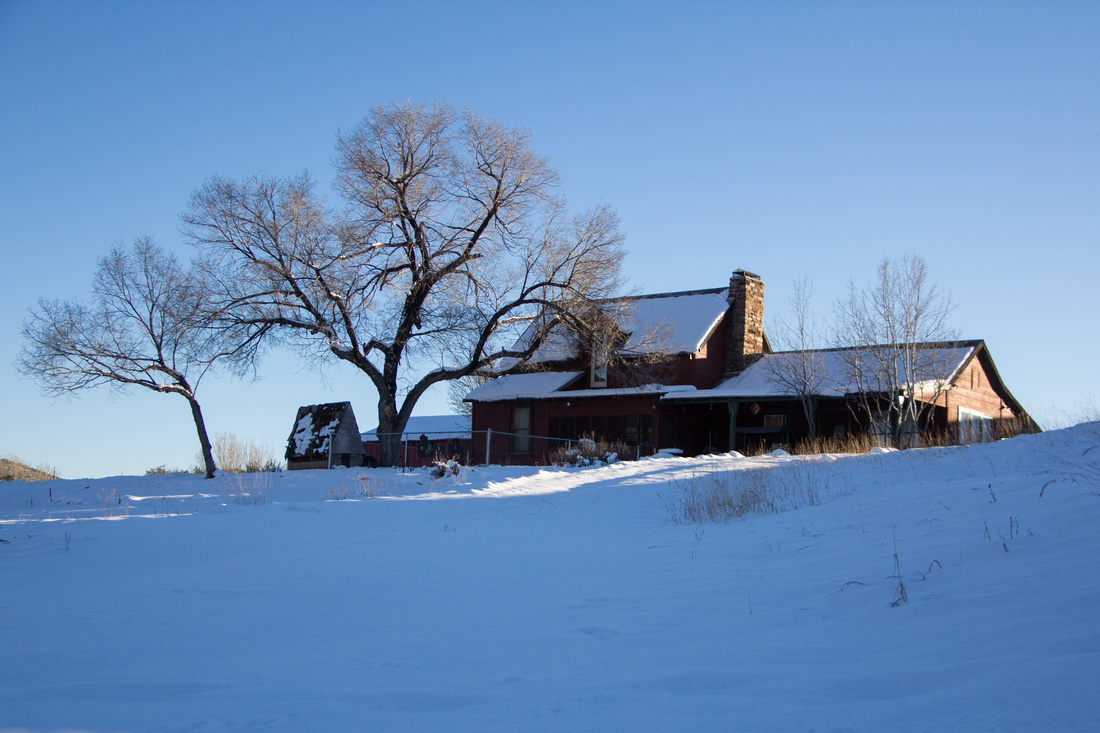 We went back in through Heber and the same path we had initially taken on our road to Colorado. The only detour was that we stopped and visiting my Grandparent's Cabin in Star Valley, which was beautifully covered in snow. We arrived back home around 4pm very tired, but happy. All in all, it was a good trip, and a fun way to bring in the new year.