I have been trying to improve my lightning photography but it's hard since you don't really get a lot of chances to practice! This has changed a bit since moving to Colorado. Lately, we have had some amazing evening storms and the past few have put on some beautiful shows. I had always hoped to have a good chance at photographing lightning, and after some research came across a cool gadget called a lightning trigger. It hooks up to your camera and triggers it to take a photo when it detects lightning. I have wanted one for a while, but never splurged to get it. However, this year Bill got me one for Christmas and I have been so excited to try it out!

Unfortunately, the model I had picked out specifically stated it worked for my camera, but it had the wrong adapter cable. We reached out to the company with not a lot of hope since it has been months since Bill purchased it. However, this company was great to work with. They realized it was their error (their research had my model camera needing the wrong adapter) and sent us a replacement free of charge! Awesome!! Except, when it came it still didn't work. I called them back and they were extremely apologetic and are sending me a completely new trigger. This will arrive on Tuesday, so I am very eagerly waiting for it to come. Hopefully it will help for the daytime lightning since it doesn't get dark here until 8:30/9pm. In the meantime, I have been playing around with what I can do manually.. and some of it came out pretty good!

Here are some of the examples of a storm during the day. I can't tell you how frustrating it was trying to play with settings to get as long of an exposure as possible to maximize my chance to get a lightning photo. There was so much light out so I could only tweak my settings so far. This was one of the best shots I got. I am really looking forward to getting my lightning trigger so I can adjust my settings better and trust it to take the shot at the right moment. 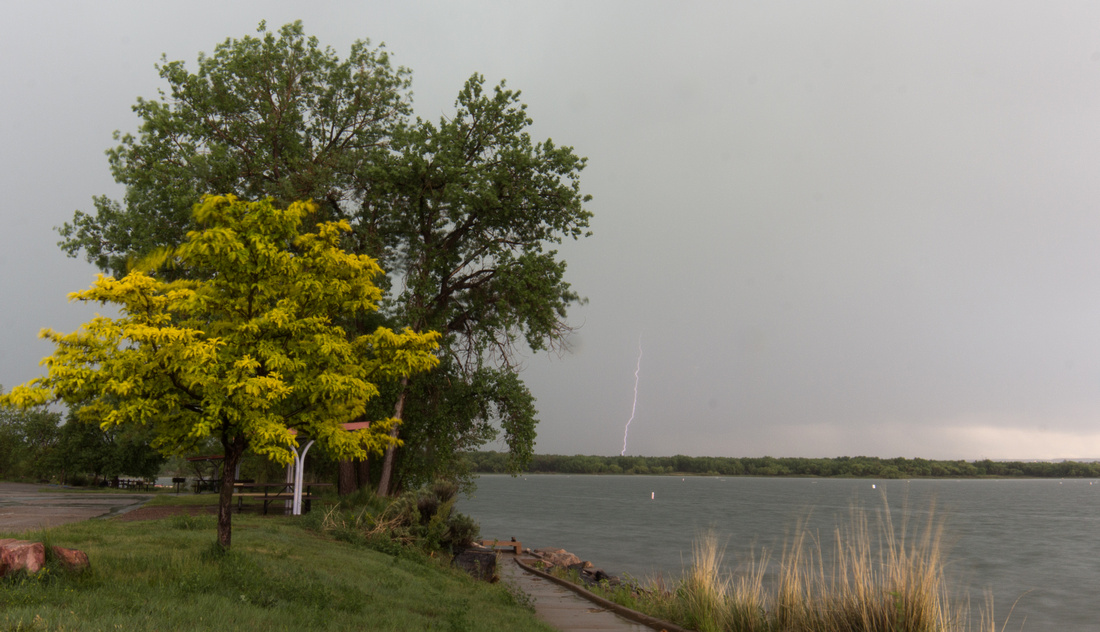 We had another storm later that week that came in after a fantastic sunset. We weren't able to get out there soon enough to capture the color of the sunset, but it was still a good show. My favorite from the night was this one. Its so much easier when I can set my camera to long exposure! But there is still a lot of crossing your fingers and hoping for luck. Two very key things are involved and can't be planned for completely. That you are pointed where the next lightning strike will happen, and that you are taking the photo when the lightning strike happens! I can't tell you how often it was right after your shutter clicks shut that the awesome strike hits. I loved how this one turned out. Bill managed to get a great shot of this one as well!

Last night, we noticed a bit late that there was a cool thunderstorm that had been rolling in. We rushed out of the house to chase it, but it had started to fizzle by the time we were setup. I got a decent series of shots that I experimented with stacking into one and thought the result was pretty cool! This is a combination of three shots. Unfortunately the original had a lovely red streak through each of the shots where a plane had flown by while I was taking the photos. I got to experiment with Photoshop to pull that out. I think the end result is pretty cool!

What you don't see is the swarm of mosquitoes surrounding us while we were taking the photos. We didn't notice them at first, we were both so focused on trying to capture the lightning. However, they quickly made us aware of their presence! We sprayed down with bug-spray, but that turned out to either be either old or just not an effective deterrent. It was even worse when we hopped into the car to avoid the incoming rain only to find easily another 2 or 3 dozen mosquitoes had followed us in and were now trapped inside with us!! After a massacre of all those little buggers we tried to come up with an alternate way to get in and out of the car to avoid so many coming in with us. We did better, but easily ended up with a dozen each time we stopped. There has got to be a better way!

My last shot of the day was my favorite from the night. Right after this one was taken the rain hit us. Luckily I had Bill with me, and he has learned so much from his recent storm chasing that he was able to warn me of incoming rain. We got back in to the car and within 20 seconds the rain started coming down hard! So glad my camera wasn't out in that!

There is another storm coming in tonight, so hopefully I will have more to add. But I am happy with what we have captured so far! Can't wait to start playing with my lightning trigger. I will post my results when I have them.