A little backstory before I start. My boyfriend and I recently moved to Colorado. We have been here since August of 2015, and we both had different priorities in mind when we moved. I love taking photos and growing things, so the thought of being away from the desert and near the beauty that is Colorado and the Rockies really made me happy. Bill loves storms, so his excitement all had to do with being closer to the plains and having a chance to finally chase storms.

Since I love taking photos, I signed up to help photograph the storms whenever I had a chance to go with him. This weekend everything lined up perfectly so we headed out. We got out to our target area (near Akron, CO) pretty early, so I took some time-lapse photos of these beautiful fluffy clouds while he watched the radar. I don't yet have a good solution for combining my time-lapse, so those will be posted later. In the meantime, stuff started happening further south so we packed up and headed south to see what was going on. 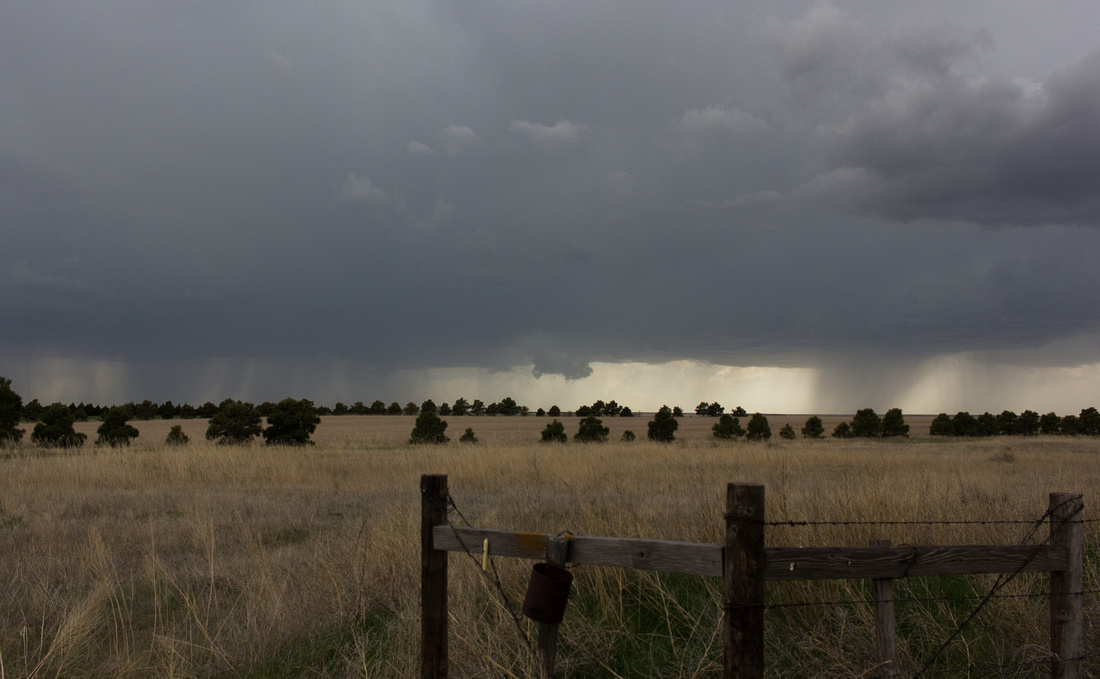 Route36First stop of the day

We stopped and got some initial photos of the storms. While we were stopped, fellow chasers kept driving by and waving! It was a great way to start the day. We drove down a little further and decided to stop again, but to our surprise we noticed that one of the chase tours that had driven by earlier (Silver Lining) had made the same decision! So we all got out and took some photos, but nothing exciting happened yet.

We also met another chaser named Greg and got to talk to him a bit and compare notes. It sounded like we were on the same page, which was encouraging since we had not been doing this long. In fact this was my first and Bill's third time out on a real chase. So once the rain hit we all packed up and headed to the northeast. 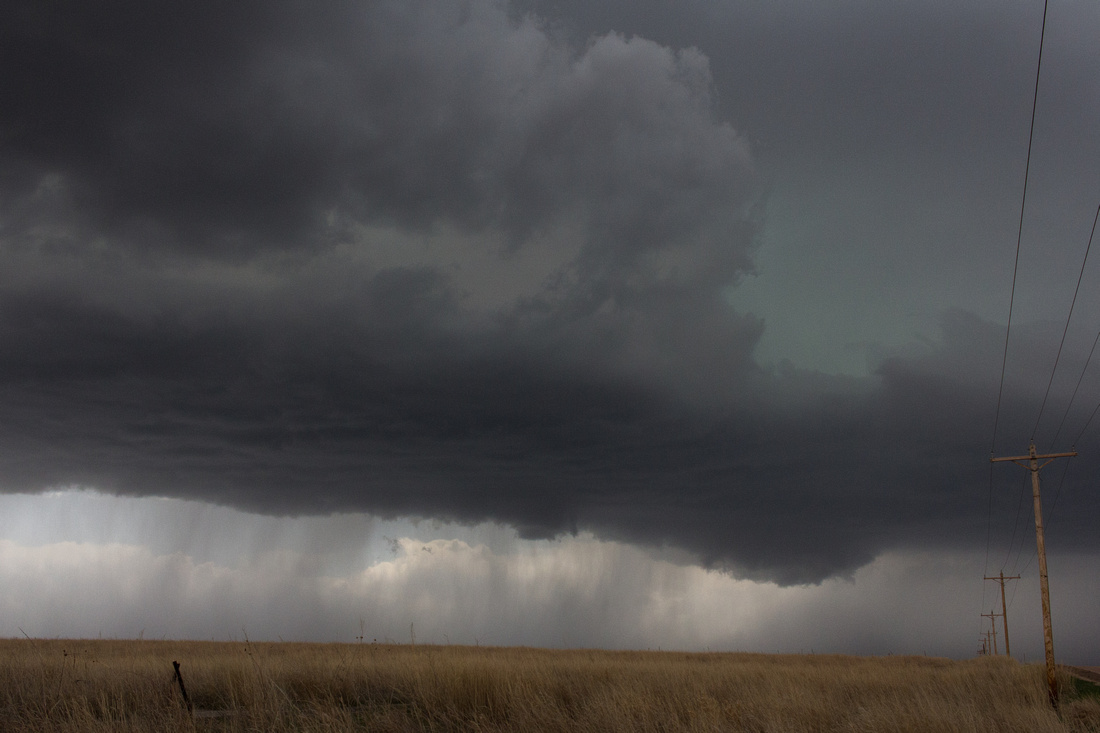 We stopped several times as we were chasing the storms and kept seeing some beautiful features. It was also my first time seeing the odd greenish cast to the clouds that I had heard of, but never seen personally. We then moved to Eckley, CO. We stopped in a graveyard of all places and watched the storm move towards us. The view we had of the storm completely took over the horizon it was so large. This panoramic helps somewhat in showing the immensity of the storm. If you look on the right you can see where the sky is starting to turn black. This was the the whole sky to the west of us and it was just constant rolling thunder.

This was also our first experience with having the town's tornado siren go off while we were watching the storm! This would happen to us again later in the day. We never did see the tornado they were warning about, but it was still a beautiful view. In fact, a tad too beautiful. We got hit by hail on our way out of town. Guess we should have left a bit earlier!

We followed this storm for a while, but it never produced anything big so we decided to venture out a bit and head towards Wray. We actually saw the Dominator in town while we were there. That was kinda cool, and a little nerve wracking when they decided to turn left at the stoplight Bill had already said we would be turning right on! After some more radar checking Bill decided to stick with his decision and we headed south out of Wray around 4:40pm. 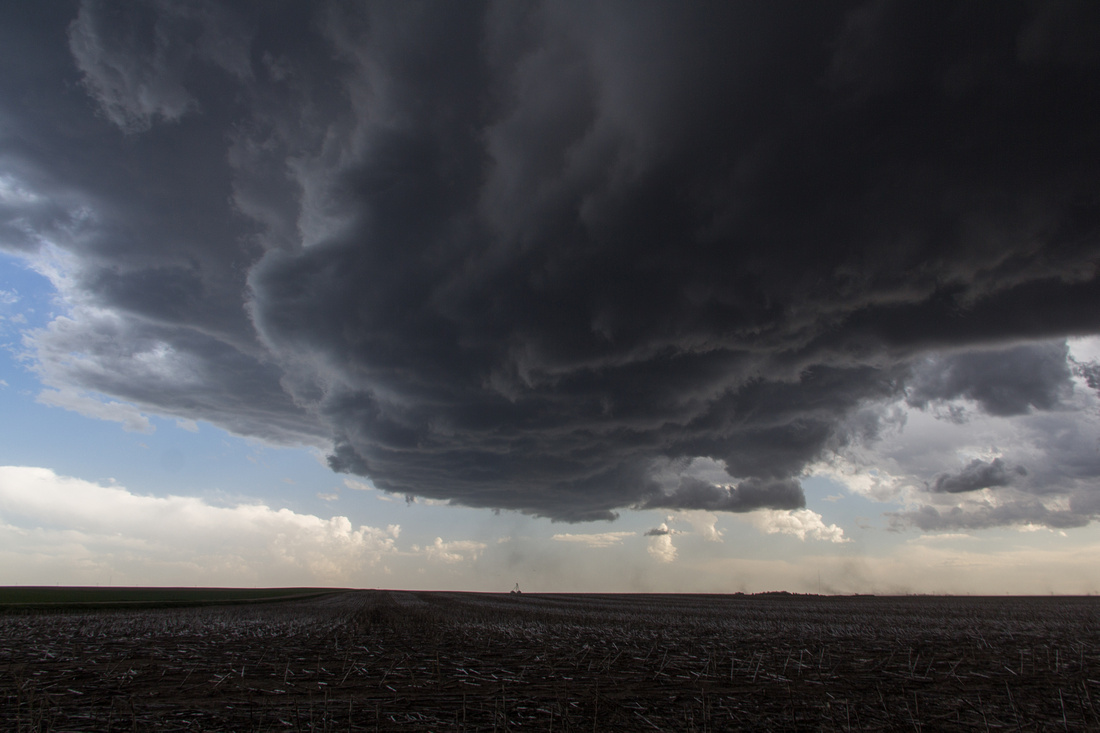 At this point we have not eaten anything more than chips and popcorn and decided it was time to grab a late lunch. I setup another round of time-lapse, and by the end of it we were seeing this formation! This was looking very promising so we kept filming and taking photos. That was until Bill saw it was rotating immediately over our heads and we needed to get out of Dodge now. We packed up and got a small distance away, but when we stopped we saw it was not nearly far enough away. We kept moving north small distances, but the storm was right behind us each time we stopped. Bill decided we needed to head east, and that made a huge difference! We setup and got to watch the tornado form! 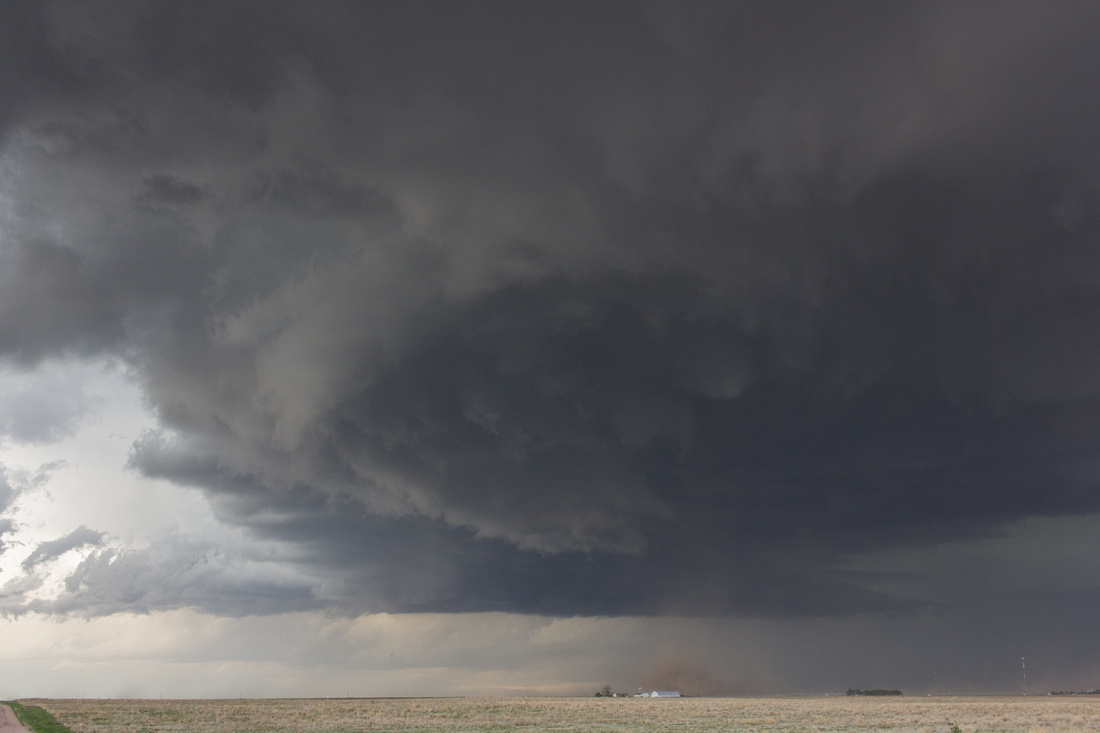 We watched this for a while, and it kept rotating all around us. It was so amazing and powerful. Eventually it solidified and started booking it north so we hopped back into the car to catch up. 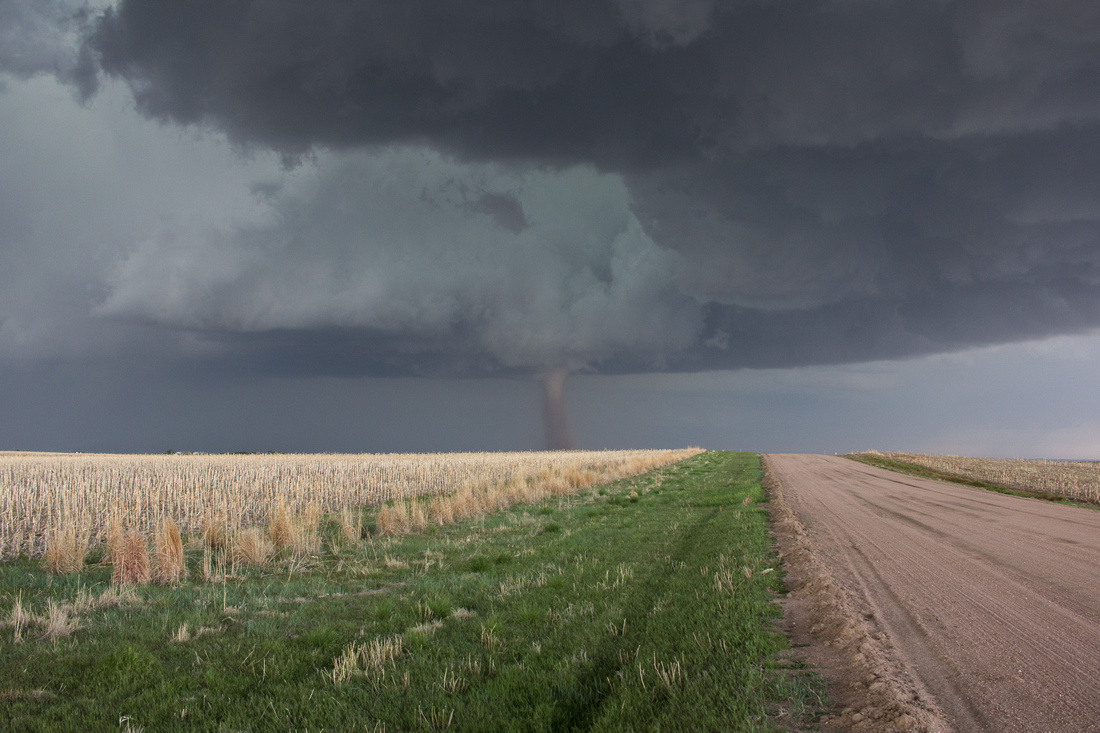 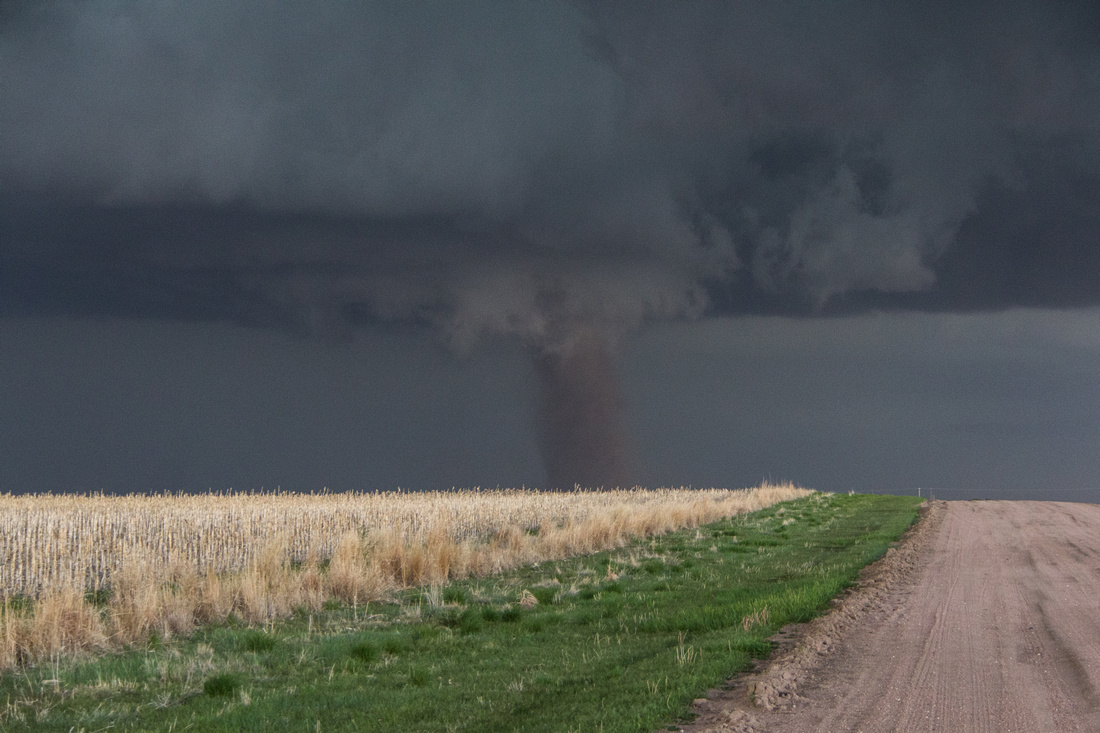 I can't believe we actually got to see it form and now we are following it! Unfortunately it was headed directly for Wray, so we were both thrilled and a bit worried for the town at the same time. 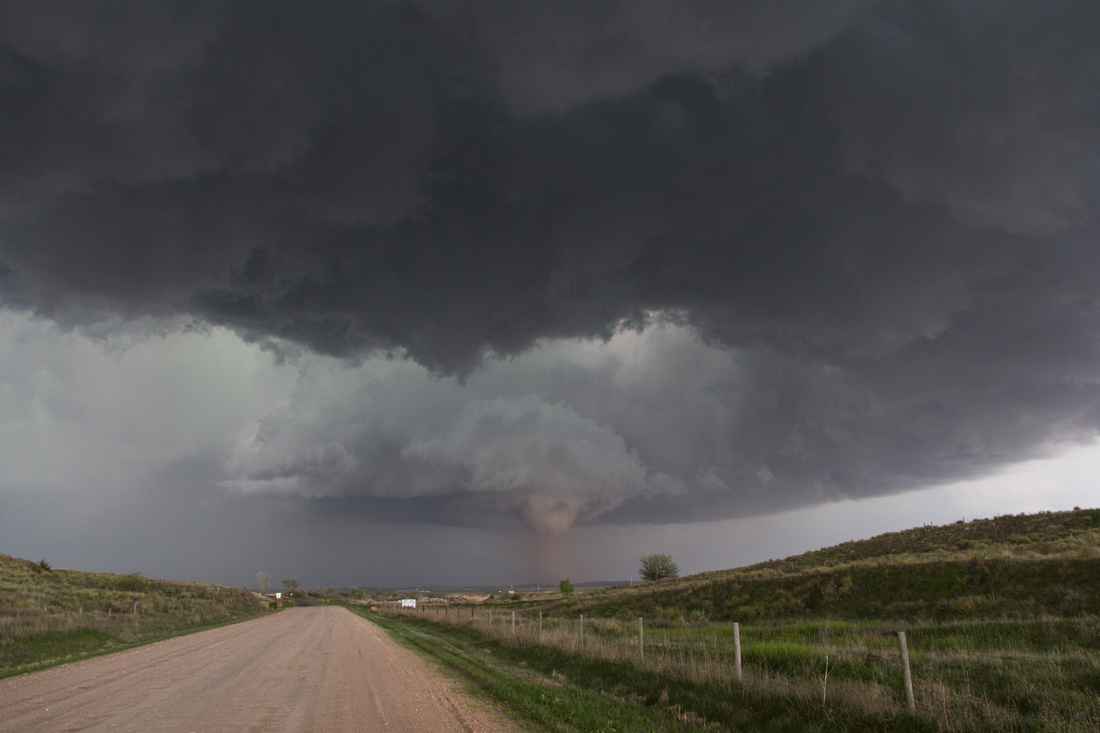 We found out later that there were a handful of people hurt but no one killed and a few buildings were damaged. After catching some more photos, we tried to head north out of town to keep following this storm. Once we hit Wray however, we found the road was closed due to some downed power lines. We tried a couple times to go around, but this pretty much ended the chase for the day, but what a way to end it! I had a great time, and can't wait to go again. I could not have done it without Bill on the Radar and deciding where we were going next and when it was safe to stop and when we had to move. I also got this panoramic of the tornado I am pretty happy with.

Album with all my photos from yesterday's storm: Wray 2016

I know he is still typing up his entry for yesterday's storm, but it will be up soon with more information and the videos from our chase.